I was so honored to be asked to speak to the 2018 ACTFL Assembly of Delegates.  As the Vice President of the Minnesota Council of the Teaching of Languages and Cultures (MCTLC), I shared with the delegates how we as an organization have led and engaged in change conversations locally, regionally, and across our great state of Minnesota.  Much of our work aligns with the ideas found in the book, “Switch, How to Change Things When Change is Hard,” so I will outline our work using many of the same steps found in this book.

So, what do we usually hear people say about change?  “Change is hard.” “People hate change.”  These are the quotes the authors Chip and Dan Heath heard when they studied change.

Ironically though, the authors note that people who say they hate change still encounter, and often embrace, change on a daily basis.  Every iPhone sold serves as counter-evidence. So does getting married or having kids – I would know, I had my second daughter, Clara, in September!

So why do some huge changes, like babies, come joyously?   And why do other changes, like adopting effective teaching practices, meet fierce resistance?

When these two systems align, change can be easy.   When they don’t, change can be grueling. So in those situations where change is hard, is it possible to align the two systems?  The authors, and I, believe it is. But in order to effect change, we will need to create a supportive environment, set clear and actionable goals, and appeal to our emotional system.

Point to the destination

Our destination in Minnesota is the Bilingual Seal.  Students aiming to earn the Seal must demonstrate proficiency in all four communication modalities – reading, listening, speaking, and writing.  If they are able to do so, they not only earn the Minnesota Bilingual Seal and a notation in their high school transcript, they also earn college credits at Minnesota state colleges.

The implementation of the Bilingual Seal in Minnesota now means that every world language program in our state has a clear, measurable goal, which appeals to our rational systems.  But our end goal here is also emotionally-charged, because for the first time, Minnesota schools can honor not only the languages we instruct in our institutions, but also the numerous languages that our students come to our schools with every single day.  This includes the Tamil language, an Indian language and one of the oldest surviving classical languages in the modern world, and we are currently the only state in the country awarding Bilingual seals in Tamil. For these students and families, the goal of earning the Bilingual Seal is emotionally charged, because we are not only recognizing their language, but also their culture and heritage as well.

To answer that question, we had to find the bright spots, which the authors of Switch define as the occurrences of over-performance, such as an A in a report card full of B’s and C’s. Instead of spending time analyzing the problem, we could better spend our time analyzing already-occurring solutions in Minnesota.

So how could we replicate what had been done in my own district on a larger, regional, and even statewide level?

To do this, we needed to script the critical moves.  The authors of Switch note that when confronted with too many choices, we tend to have decision paralysis.  So it’s crucial to draft clear and simple guidelines for change to be effective.

We collaborated with MCTLC, the Minnesota Department of Education, and area world language coordinators to create an annual series of five professional development sessions offered throughout the year for area world language teachers.  In 2016-2017, we ran the IP-Yay! series, where participants created performance-based curriculum focused around IPAs.  In 2017-2018, we offered the Rate it! workshops, where participants explored how to use performance rubrics to assess what students can do with the language.  These sessions provided tools that teachers could bring back to their districts to help script their own program’s critical moves: unit plans that we encouraged every teacher to complete for every unit and performance-based rubrics produced by ACTFL to rate student performances.  This year, MCTLC is sponsoring the Proficiency + Performance = Classroom Possibilities series, where we are exploring how proficiency impacts instruction.  We’ll be providing performance-based activities that focus on what students can DO and build interculturality.

By providing these clear and simple guidelines, we are helping districts script the critical moves towards proficiency-based programs and implement these effective practices.

When looking to effect change, the authors of Switch note that it’s helpful to set small and easy steps in the face of dealing with a large change.

When people begin to look at overhauling their entire curriculum to be more proficiency-based, it’s overwhelming, and so many teachers don’t know where to start.  So we needed to shrink the change, and we began to advise – start with one. Start with one unit, and make it a really great unit. Map it out on the unit plan, implement performance assessments, and take time to reflect – how did it go?  Reworking an entire curriculum is going to seem like a insurmountable mountain to some people, but one unit? One unit is doable.

The authors of Switch say that one prevalent and fundamental mistake in change conversations is the Fundamental Attribution Error, where we tend to attribute problems to people rather than the situation itself.

For MCTLC, we understand that in order to effect change, we have to tweak the environment to create pathways for all.  We started by creating the collaborative professional development series that we offer annually.

Then we created pathways at this year’s MCTLC conference, so that sessions on the 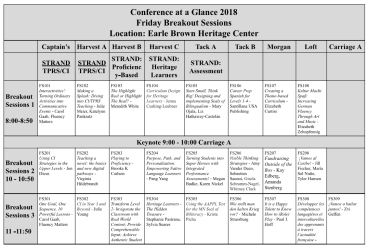 same topics don’t overlap, and conference attendees had the opportunity to attend all the sessions in their chosen pathway.  This included a pathway for teaching heritage learners, where we featured the first ever Hmong literacy coalition. MCTLC is proud to be a community partner for this two year coalition focusing on Hmong teacher professional development, curricular creation and sharing, and youth mental health awareness.  We are proud to share that this year’s conference attendance was one of the highest it’s ever been.

We purchased our first ACTFL Virtual Learning Module (VLM), which is free for the first 100 MCTLC members.  It comes complete with a study guide (because remember, we need to script those critical moves!), that MCTLC members can complete individually, but we are encouraging members to complete this virtual learning module and study guide with their teams for a collaborative learning experience.

We also partnered with Vista Higher Learning to create an incredibly successful 3-part webinar series on rating student performance.  Over 300 people tuned in for our first live webinar – and with so much competing for our attention these days, when do we ever get over 300 people to tune in for professional development on a Monday night?!? Truly, the numbers here are indicative that this tweak to our environment is not only a success, but a vital part of providing professional development in the 21st century.

Now you may be wondering, will all this really influence those who are resistant to adopting effective practices?  Or will these steps only influence those are who ready and wanting to adopt those practices?  Well, let me share a dirty little secret with you…. I was once one of those who resisted.  Yep, that’s right, me. In fact, when my former world language curriculum coordinator first led us down this path to proficiency, I protested quite loudly.  “I teach 6th grade!” I said. “They can’t possibly have spontaneous interpersonal conversations without any resources!!!” But my coordinator persisted, and implemented many of the steps I’ve shared with you in this post:

She pointed to the destination – we needed a curriculum that focused on what students could DO with the language.

She shrunk the change – she challenged us to only create and implement ONE unit that was performance-based to begin with.

She scripted the critical moves – she provided us templates to create a unit guide and IPAs.

And she found the bright spot – we referenced the first Keys book, the Keys to Assessing Language Performance – as the way we could do all this.

And in the end, after I had implemented one unit, I bought in.  I saw my 6th grade students have successful interpersonal conversations without resources.  And I had students writing up to two pages about their school schedule in an on-demand presentational assessment – something that had NEVER happened before, even when they HAD access to resources at their fingertips.

You see, I had found the feeling.

Chip and Dan Heath state that there are two main methods to change behavior: the first is analyze-think-change, which is more strategic.  But even though I was a rational thinker, I still wasn’t buying into these effective teaching practices.  That’s because I needed to experience the second method of behavior change, which is see-feel-change. I had to create and implement that first unit so I could SEE and FEEL that it could work.  And only then, was a I ready to change.

And change I did – with my middle school Spanish team, we created a world language curriculum that is performance-based and tied to proficiency outcomes.  I became our district’s next world language coordinator when the next cycle of our curriculum review came around, and I helped my department articulate our proficiency-based curriculum and implement the newest ACTFL-produced performance rubrics.  And now I provide professional development to help others make these changes as well.

Change is a continuous process, and it’s important to sustain it for a long period of time before the intended results can take place. At MCTLC, we plan to continue using our conference, webinars, ACTFL VLM, and annual face-to-face PD sessions to support and sustain our world language teachers on the path to proficiency.  I hope our story has inspired you all to lead courageous change conversations locally, regionally, or at the state and national level.  In this new year, may we all take charge and lead the change.

View all posts by Megan Budke